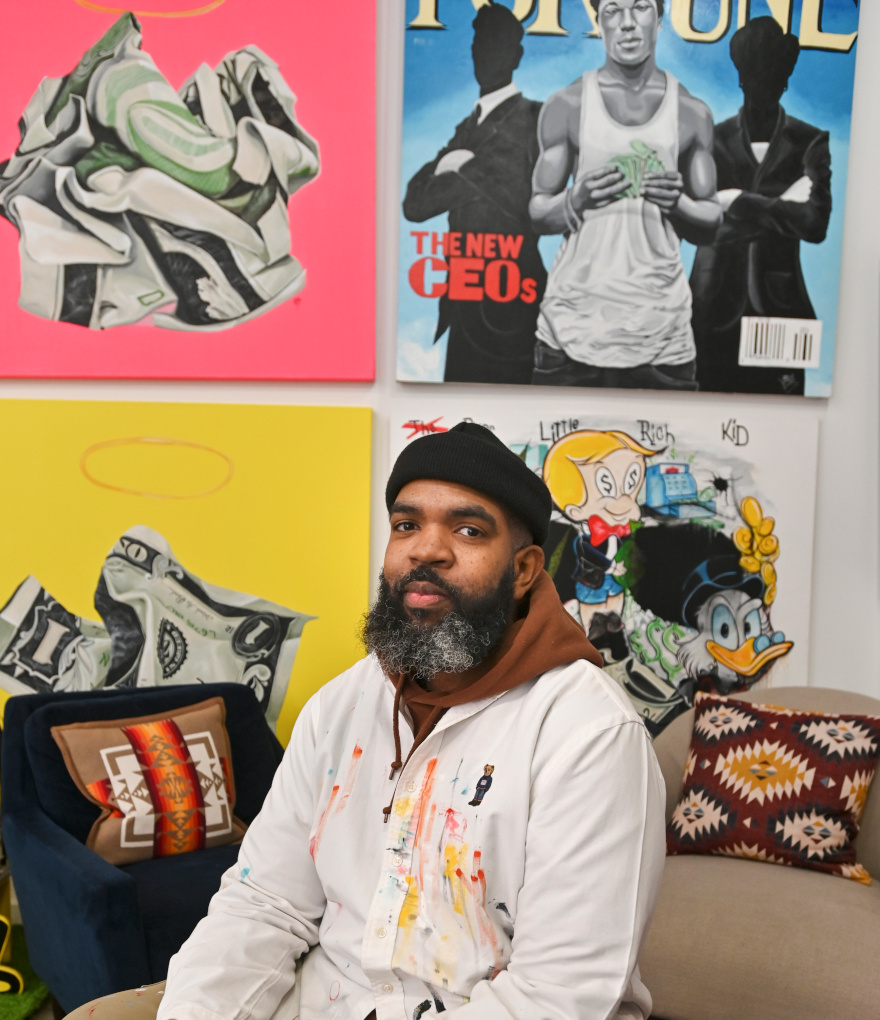 Artist Zeph Farmby walks from his residence on Washington Street  to his studio at 68  Jay with his great dane Pharaoh faithfully by his side.  While one hand clutches the  leash, the other supports an oversized portfolio, an object reminiscent of days gone by.  The New York Times eloquently captured this image in the feature they published about the artist in 2019.

I used to cry to my mother and say “I want to draw sneakers and cars”.

Born in Chicago in 1978, Farmby cannot recall a time when he wasn’t creating. Surrounded by an artistic family, his father who served in World War II as well as his older brothers, liked to paint and draw. “When I was maybe 4 or 5 years old, I wanted to mimic them,” states Farmby. I used to cry to my mother and say “I want to draw sneakers and cars”.

Inspiration revealed itself in both the masculine and feminine sides of the Farmby household. His mother was the neighborhood clothing designer.  Zeph remembers their dining room table overflowing with fabrics, pattern paper, pins, needles, chalk,measuring tapes and sticks. . Neighbors and family were always coming by to get fitted for party dresses and new suits. He recalls taking trips with his mom to Woolworths and helping her go through bolts of colorful textiles and watching her select spools of thread for her latest creations.

Farmby had set high artistic goals at a very young age, “I remember wanting to draw better than my brothers, I  always had that drive and desire to take my artistic talent to the next level.” I was the little brother striving to be the big artist.”

Recognition became a reality in high school when Zeph was accepted into the Art Institute of Chicago’s teen program. The class consisted of advanced college students, one other teenager and Zeph. It was an overwhelming experience, states Famby.  “Walking into my first life drawing class was a total shocker. It was a transformational moment, and the first time that I felt like a real artist.”

An adventurous 11 year old,  Famby rode the Chicago subway by himself  into the city to buy books, comics and magazines. Inspired by his surroundings he began writing on the subway walls. By the time he entered high school he accelerated into being a full scale graffiti artist. CUBE was his tag, which means cold in slang, which translates into really nice.

“I was an active participant in two worlds,” recalls the Dumbo artist. . I tagged the subway while riding to the Institute where I was receiving a traditional education in fine art. It was a combination of formal schooling and street life. It was rumored at the Institute that I was in fact CUBE but nobody knew for sure except my graffiti friends and my mother. I can still hear my mom’s voice repeating “If you go to jail, don’t call me” but she always said that with a twinkle in her eye “.

Farmby’s space is a sanctuary of chill, talent, beauty, and history.

These two visual languages still coexist in his work today, While his technique has evolved,  the imagery and messaging have remained the same.

When entering Farmby’s  studio one is initially starstruck by Pharaoh, the gentle giant, If he likes you he might lean on you, which is a lovely compliment, Coupled with Zeph’s calm and peaceful demeanor, Farmby’s space is a sanctuary of chill, talent, beauty, and history.

The artist’s drawings of African American icons present themselves in a variety of mediums including newsprint, which serves as the background for his powerful series SOCIAL STUDIES, which is an ongoing body of work, ,

The grounding medium for this series is the collectible New York Post edition where the sole image is the supreme logo on the front cover of the iconic newspaper.

I wanted to create a group of drawings, with the goal of teaching my new child about the history of her people.

The skateboarding brand SUPREME was so incredibly popular in the 1990’s that both obscure businesses and  giant corporations began licensing the  logo as a marketing tool. At one point, their logo appeared  everywhere from Colgate toothpaste to Louis Vuitton bags. The New York Post  chose to comment  on this cultural phenomenon by  publishing  a rare  minimalist front page with the popular bold red logo as the sole visual” explained the artist.

The paper, which sold for 1.00 a copy, shortly  became a collector’s item worth at least $100.00. a pop. Farmby, a big supporter of the brand, did not initially secure a paper. However, years later a friend of a  friend who had 30 copies of the collectible gave the entire stack to Farmby free of charge.

At this time, Farmby and his wife Anaya were expecting their first child.  Inspired by the prospect of becoming a father,  Zeph decided to use the front covers as backdrops for drawings of African American icons. “This series is dedicated to my daughter, I wanted to create a group of drawings, with the goal of teaching my new child about the history of her people.”

SOCIAL STUDIES HAS BEEN exhibited at SOHO WORKS, Miami Art Basel, Bishop Gallery and soon to be shown at The Red Museum in Osaka, Japan.

The artist creates  5 to 8 new pieces with every consecutive showing. This ongoing body of work has included drawings of Malcolm X, Angela David, Emmett Till, Barack and Michelle Obama, Muhammed Ali, Mike Tyson plus many more.

Reexamining the images as an adult,  Farmby exposes the brainwashing influence that these characters had on young minds.

Another powerful series worthy of note is “Brainwashed”. As a child, Zeph enjoyed watching cartoons on TV. Reexamining these images as an adult Farmby exposes the brainwashing influence that these characters had on young minds. In the painting of a Tom and Jerry cartoon there is a black woman character who is pictured with big muscles and a heavy body but no head.  Zeph remembers this  nameless character whose face was never revealed. “It was as if she was never even deserving of a proper identity.” states the artist. Additional works in the show expose the stereotypical images that were prevalent in vintage cartoons during that time.

Currently the owners of Empire stores have awarded  Farmby J.Crew’s former space on Water Street to be utilized as both a studio and exhibition space. Here you are able to view Social Studies as well as other artworks by the prolific and talented Dumbo artist. Pharoah will also be in attendance.