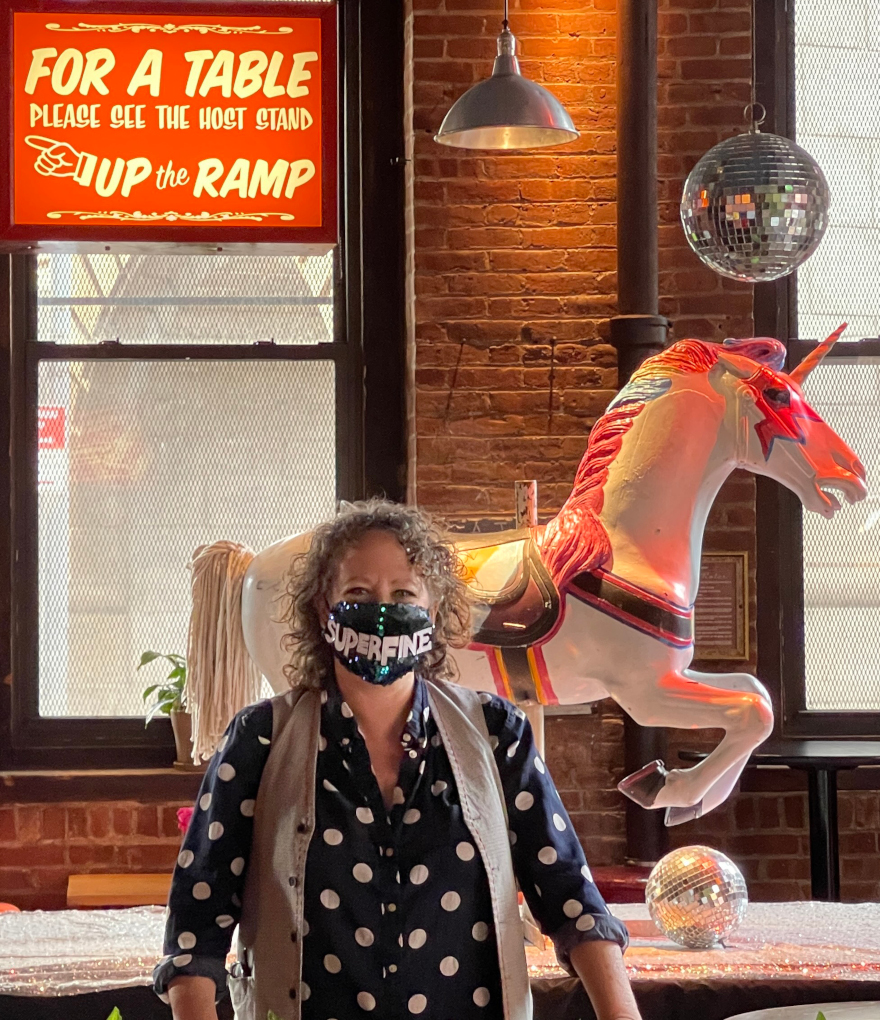 A Tanya Talk:
History of Superfine

Superfine, the restaurant/cultural hub is a manifestation of devotion to our ever-evolving neighborhood of Dumbo. Working owners Laura Taylor, Tanya Rynd, and Cara Lee Sparry, provide culinary, artistic, and cultural sustenance to those under the bridge and beyond. The three owners bring their own individual talents to the table, composing a complimentary smorgasbord of perfection. Superfine is collaboration at its finest. In 1998 the trio launched their first Supper Club in their loft at 25 Jay Street. From 1999-2000, they began serving lunch & dinner at the Between the Bridges Pub on York & Adams Street. The 90 year old bridge worker’s bar eventually closed in 2004 making the way for the new condo buildings.mother

In the year 2000, they took the plunge to open their own restaurant and Superfine’s brick and mortar location was born. The architectural gem was previously a warehouse for a vacuum cleaner and auto parts. It also served as a feather factory, the offices for E.W. Bliss, horse stables for the carriages that ran goods from the docks to the warehouses on the steel tracks throughout the neighborhood, and finally, the art studio for Dumbo pioneer, Max Whalen.

Cara Lee Sparry (pictured between Tanya and Laura), an honors graduate in Industrial Design from Pratt Institute who moved to DUMBO in 1992 (known in the neighborhood for her motorcycle, ever-changing hair color, and the ability to create and/or fix just about anything) tuned into her ability to listen to a space. “I undid 60 years of manhandling to showcase the beauty of a 100 year old building” states Cara Lee. After a year of the owners doing the actual construction themselves, they hired the contractor of local arts organization Smack Mellon to help them finish off the job. Every new venture needs an angel. “Tommy Bordonaro was our gift from the universe,” sats Tanya. Cara Lee is also responsible for Superfine graphics, design, marketing, and curation & installation of Superfine’s monthly art shows.

In the year 2000, Dumbo had already been identified as a thriving arts community and 68 Jay Street became known as the epicenter of creativity in Dumbo. This was the year that Pedro Rosenbleuth, founded the original Dumbo Direct, the in-print publication which connected the neighborhood. Artist, Joy Glidden, another former 68 Jay tenant, organized the Dumbo Arts Festival. Gale Gates Dance Company, DAC, and St. Anne’s warehouse also contributed substantially to establishing Dumbo as an arts community. The building was occupied with creatives from all over the globe, working in diverse mediums. Cara Croninger. pictured below, the pioneer of polyester resin jewelry was a resident in 68 as well as other artists and artisans including Marc Dennis, Federico Solmi, Heather Huchinson, Franca Sangiovanni, Kevin Auzenne and Andras Halasz to name a few. The building was bursting with creative energy and episodes of fun and intrigue as a majority of the artists lived “illegally” in their lofts.

“We ran out of money, everybody had to bring their own chairs and tables”

Superfine’s mission was to create a creative hub where the artists could gather, eat great food and feel a true sense of community. The timing was perfect. Superfine opened a month after 9/11 which was the weekend of the Dumbo Arts Festival and it was an overwhelming smashing success. “It was explosive, the only issue was cash flow, we ran out of money, everybody had to bring their own chairs and tables” added Tanya.

Laura Taylor, Superfine’s chef, originally studied printmaking and Raku ceramics. However, 40 years ago, her main interest switched to food. Tanya who met Laura when they both lived in Santa Fe New Mexico describes Laura as a true Mother Earth, appropriately with a sun sign in Taurus. Her belief in the freshest food possible, directly purchased from farmers, ensures that a meal from Superfine originates from a sustainable source and is always handcrafted. Many of their main suppliers are farms with stands in the local Fort Greene Farmers Market.

Tanya, originally from Seattle is the public face of Superfine and runs the front of the house. True Dumbo royalty, Tanya came to New York to pursue a career in painting and performance art. If anyone understands the magic of the show it is Tanya and she brings this magic to Superfine and everywhere else she chooses to roam. Tanya lights up a room with a love of people, the community, and the arts. Still pursuing her art, Tanya’s paintings can periodically be seen on Superfine’s art wall or you can view her work at www.tanyarynd.com.

Ken Ardito, Josh Reynolds, Jaimie Walker, Craig Anthony Miller, are a sampling of Dumbo artists whose work has graced the 30-foot art wall which rotates every month. According to Tanya, they have shown more work than most galleries in New York City. There are collectors in New York and nationwide whose collections include work that was shown at Superfine. The trio is also committed to assisting neighbors in times of need. When John Ensor Parker, the architect/artist who curates the projections on the Manhattan Bridge was going through a battle with cancer, the amazing trio organized an art auction to raise money for his care and comfort. These women have huge hearts. They are three in a million.

Dedicated exclusively to servicing the neighborhood, Superfine does not collaborate with any of the food delivery apps

The passing of community icons also calls for communal celebrations of life. When artist, civil rights activist in his mid 90’s Dolphy Hazel passed away in 2018, Superfine organized a memorial service which included a full-length video documenting Dolphy’s life and works along with speeches from family and friends. The house was packed.

Dedicated exclusively to servicing the neighborhood, Superfine does not collaborate with any of the food delivery apps. Their goal is to develop face-to-face personal relationships with their customers and neighborhood.

As with all restaurants in New York and throughout the country, the pandemic has hit Superfine hard. They have risen to the challenge the best they know how with year-round outside seating and an expansive take-out menu. Even the outdoor pavilions have been constructed by local resident, woodworker/contractor, Jon Goldstein, known as Dumbo’s mayor…. To simplify logistics, they have combined the lunch and dinner menu into one daily menu which is available on most days from noon- 10pm.

On May 31st restaurants were allowed to go up to 75% capacity. As per Tanya business has been increasing every day and the future looks amazing.  They are welcoming the end of tight Covid restrictions and the beginning of summer with a show of Ed Rath’s paintings.  Ed has been in Dumbo since the 1980’s and has always been inspired by Dumbo architecture and streetscapes.

Superfine is an art form all to itself. Without this unique venue, serving artisanal food and supporting the arts, Dumbo would not be Dumbo. Please do what you can to support Superfine, the mother love of our community.