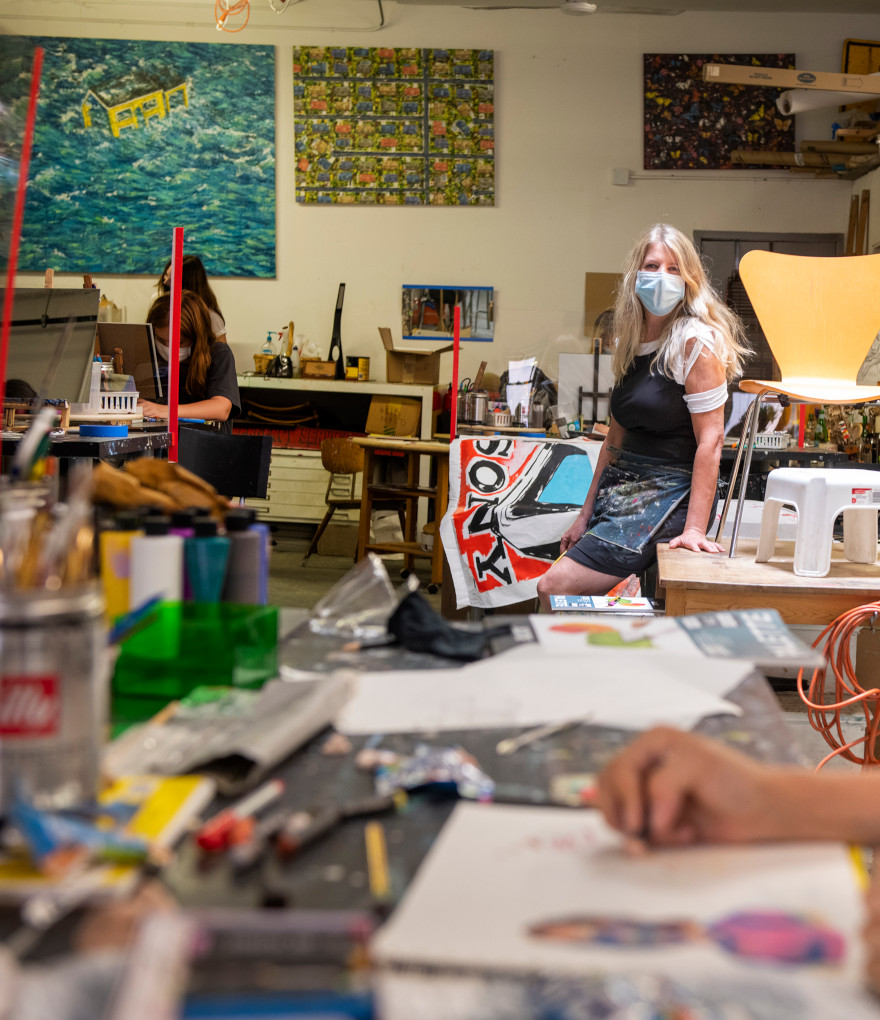 Should I Stay or SHOULD I GO?

By Dale Kaplan
Designed and Edited by Alex Hochberg

I’ve seen two exoduses in my time in Dumbo…

The first began right after the terrorist attack on 9/11 and progressed slowly but surely through 2010. Artists from all around the world packed up gradually and moved back home to Italy, Sweden, Hungary, Switzerland, Mexico, etc.

When Josh Gutman started the renovation of the 3rd floor, the artist community knew our days of cheap rent and illegal living were coming to an end. The construction of 100 Jay began, and old factory buildings were being renovated by Two Trees to accommodate the tech industries and creative agencies. But it all happened so slowly. Then one memorable day, I did not recognize anyone on the elevator in 68 Jay, I was surrounded by strangers in a building that had become my second family, It was a moment of awakening and clearly the realization that the old era had ended and a new one had officially begun.

The second exodus is today. Residents are leaving the neighborhood in droves and 68 Jay is feeling like an abandoned old mansion. There are 24 available spaces in this one building alone. Mostly everyone seems to be working remotely except for a few architecture firms, artists, and one-person businesses. The streets are very quiet.

Many people have been calling Dumbo Direct to ask have you been to the neighborhood? What’s it like? Well, people are deciding should I stay or should I go. Should I move to a smaller space or get a better deal on a bigger one. Only time will tell. We need to be patient and see what develops. Here are some of our stories. If you have a story to share, please contact us at dumbodirectory@gmail.com

“AWE (Art Workshop Experience) is staying right here,” says Marney Fuller. Her summer program focusing on portfolio preparation is in full swing at 54 Pearl Street. Fuller, a Dumbo artist who has been in the neighborhood since the 1990’s spent the spring months reorganizing the workshops’s studio space in order to fully comply with CDC guidelines. “It was a major project, physically and financially, says the founder of AWE. In the past AWE was able to accommodate 36 students per week, however, in order to remain within the guidelines, that number has been reduced to 16. The art program has been in existence since 2006.

“The young artists are required to sit and work at the same chair and table everyday. Sharing supplies is a big no no. Students will have their own pencils, markers, paints, paper, brushes etc. Where 6’ of separation is not possible we have installed plexiglass shields. Hand sanitizers, gloves and face shields are also in ample supply and we take each student’s temperature before they enter the space in the morning. Hand washing is encouraged all throughout the day.
We eat lunch together outside the studio where we can remain safe and enjoy some fresh Dumbo air by the river

2020 is a summer we will never forget. Due to the current political and public health circumstances it will be interesting to see what our talented young artists will create.
AWE also offers remote classes to those who are not ready to travel to Dumbo or work in a common space. “ We are all moving at our own pace and that’s to be respected” added Marney.

“Well, at least we still have one window” said artist Jon Ensor Parker as he cleared out his 3000 sq.ft space that he shared with 2 others since 2002 in 68 Jay Street. The trio wanted to stay but could not afford the 4200.00 per month due to COVID.” We offered to pay ½ of the rent until the crisis ended but we were met with an astounding “no.” And the sad thing is we always paid on time. “ Their space was a dumbo classic, reminiscent of yesteryear with brick ceilings and walls. The rough concrete floors still intact, were miraculously rescued from the gray laminate replacements that have permeated the building within the last few years.

Jon, and his creative partner, Farkas Fulop are known entities in Dumbo. They produce and curate the monthly, first Thursday single channel video projections on the wall of the Manhattan Bridge. In order to keep the project going, they rented window space from their next door studio neighbor, They set up their computer equipment and can currently project remotely from any location in the world.

The loss of the studio was a major blow to Jon who is now cancer free but who battled the disease for the last four years, which included a stem cell transplant and a bout with encephalitis which has impaired his short and medium term memory. He is taking a break while pondering his next body of work which will deal with lost memories. Parker will explore the philosophical question, “If you don’t remember something, did it actually happen?”

Jon, who landed in Dumbo in 1996, left for one year, missed the neighborhood’s creative energy and came back. Parker is also known for the NY Festival of Light which he created and produced in November 2014. The event was so overwhelmingly popular that the MTA and police had to close down the York Street station. “Now that’s some accomplishment, I actually shut down the F train” stated the artist. www.natureofenergy.com

Mesh Architectures and Jordan Parnass Architects share a 3400 Sq, ft. studio in 68 Jay Street. “We are happy in this space and would love to stay. We have spent significant resources making the studio work for us which has included a costly air conditioning system. Before Covid, we set up a co-working arrangement with four other firms which helped us pay the rent. Unfortunately 2 of the bigger companies have left, leaving us in a somewhat tenuous situation. The PPP has allowed us to stay current on the rent, but that government grant is close to depletion. We are willing to accommodate future co-working tenants and will do whatever possible to make them feel welcome, safe and comfortable. We are hopeful that the situation will improve in September. We have no other choice but to remain optimistic. If not, we will have to downsize to a significantly smaller space. “

It is the end of an era. After almost 30 years, the Goldfarb family has packed up their studio on the 6th floor of 68 Jay and will be working from home.. Artist Maximillian Goldfarb, the original tenant on the 6th floor, was a Dumbo pioneer who worked in the neighborhood throughout the 1990’s and early double naughts. A multidisciplinary artist, Max continues to produce site derived works in various media including sound. You can view/listen to his work on his website www.m49.us. At one time he dabbled in artistic explosions.

Max’s brother Nick, a filmmaker and his wife Tracy, a photographer, had the space for several years after Max moved on. During the shutdown they set up a home office in Ditmas Park, Brooklyn which is working out well for them and they decided to relocate at least for the time being. They also could not justify paying rent on their Dumbo studio while in shutdown mode, especially since their landlord was not interested in reducing the rent or making any notable concessions. “Although we will really miss Dumbo, sometimes you have to cut your losses” stated Nick. Their beautiful blue eyed dog Sky will go down in Dumbo dog history, as a supermodel of the canine persuasion, Sky made Dumbo an even more beautiful place to work. Check out their website at www.matadorprods.com.

” We are putting on our raincoats and galoshes and riding out the storm”, says Sam Bavaro, nephew of Vito Bavaro and president of sales for Bavaro Carting. This old school Italian family is vintage Dumbo and have been here since the 1970’s .

“We are garbage men and have built up good immune systems. We also drink a lot of vino which helps kill the virus” chuckled Sam.

Business has been down 65% for Bavaro, as restaurants and bars have been closed or doing a fraction of their business. And many of their other clients have not been able to pay their bills Vito, an eternal optimist, who is in his seventies says he has at least 50 more years in the carting business before he plans to retire. Sam let me in on a little family secret, “You know,” he whispered, “If Vito gets a cut, he bleeds garbage.” I hope they never leave Dumbo.

“I consider myself very lucky,” says the tailor extraordinaire, I was subletting on the eighth floor for many years and just as the shutdown went into effect the lease holder decided to take over the entire space. Dumbo Direct found me a studio on the 4th floor at 68 Jay Street. I signed the lease and I am in the process of moving. It is a great space and I am paying less than I was paying for my sublet.

There are some good deals out there as a result of pandemic pricing. As a manufacturer I have been able to work since Phase 1. I have been cutting and sewing masks for the brand 3 is 4. I’ve sewn over one thousand pieces. If there are any designers that need a production source for clothing or accessories we are a fully equipped shop with years of experience. We would welcome the opportunity to work with our neighbors and can accommodate both small and large production runs.”