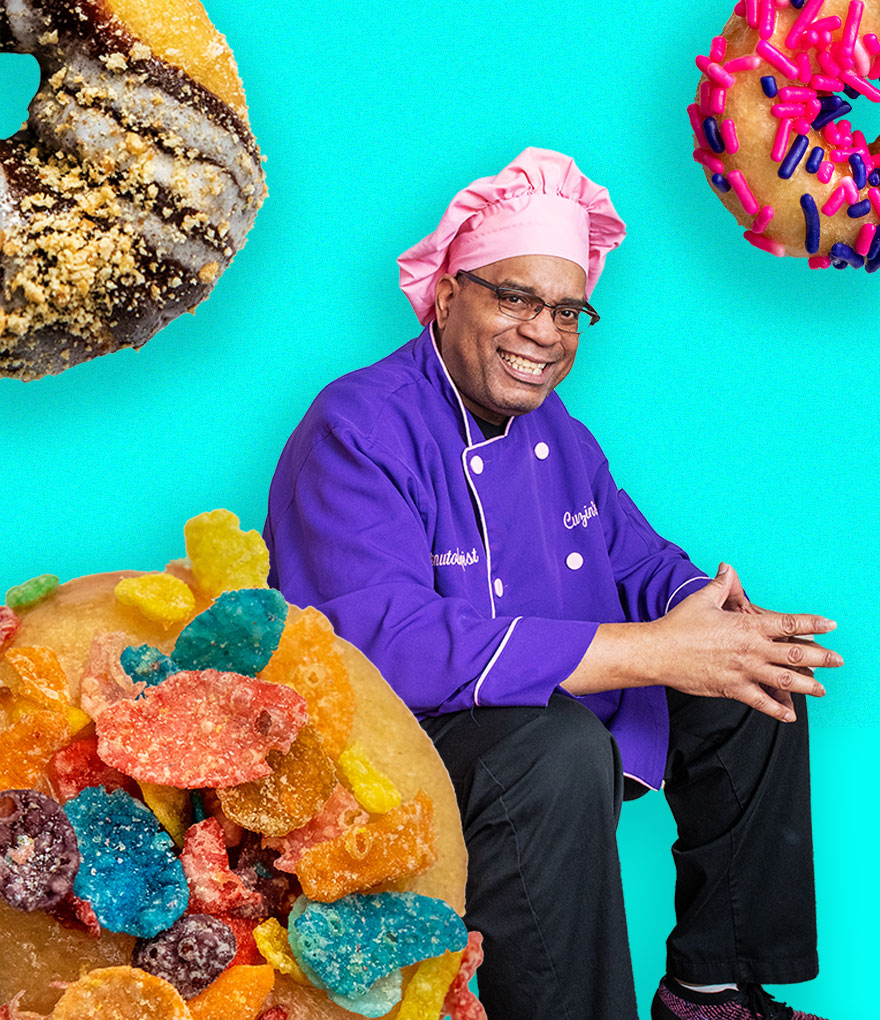 The Donutologist Will See you Now.

D is the correct answer. His name is Todd Jones, he was born in Harlem and his destiny is donuts.

44 years ago, Jones, a self described donutologist, began his foray in the world of the fried and sugary. He became the protegee to his sister’s boyfriend who owned the donut shop with the cozy name “A Cup and Two”.

After four years at “A Cup and Two” Todd moved on. He worked for various mom and pop establishments where he perfected his baking skills and expanded his knowledge of what he has personally termed “donutology.”

Jones, eventually landed a position at Dunkin’ Donuts where he became the highest paid baker in the chain’s history. “I worked at the Dunkin’ Donuts in Roslyn, Long Island which at that time was the most successful Dunkin’ Donuts location in the entire country” says Jones. “The secret to their success had almost everything to do with the gigantic window which peered into the commercial kitchen. Customers were able to watch the staff fry the donuts, sprinkle the sprinkles, twist the crullers and squeeze the custard. The people loved it. I nicknamed it “EATERTAINMENT”. During that time, I bought my first BMW and the license plate read BUYDONUTS 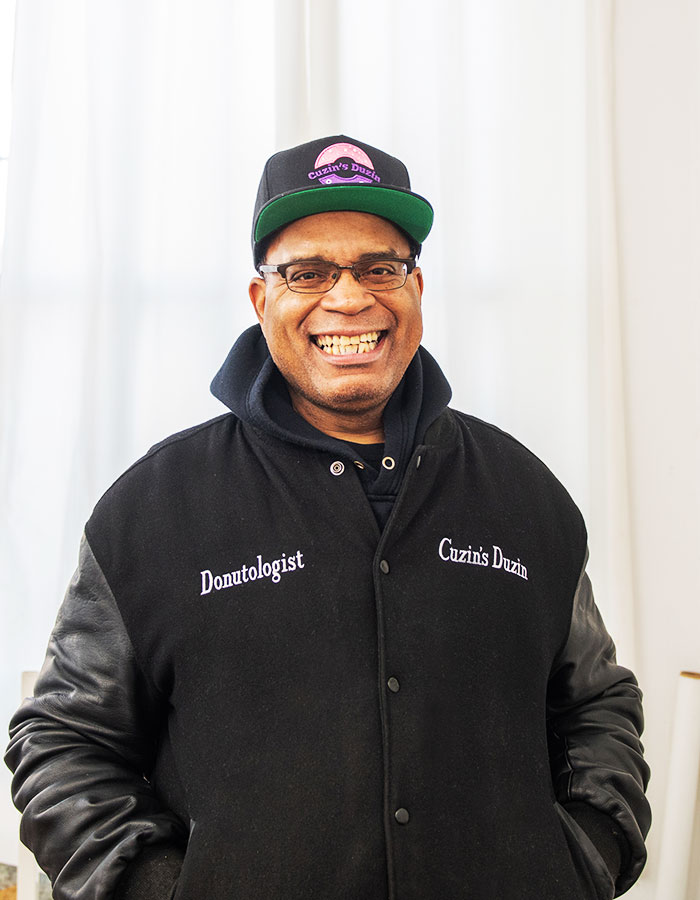 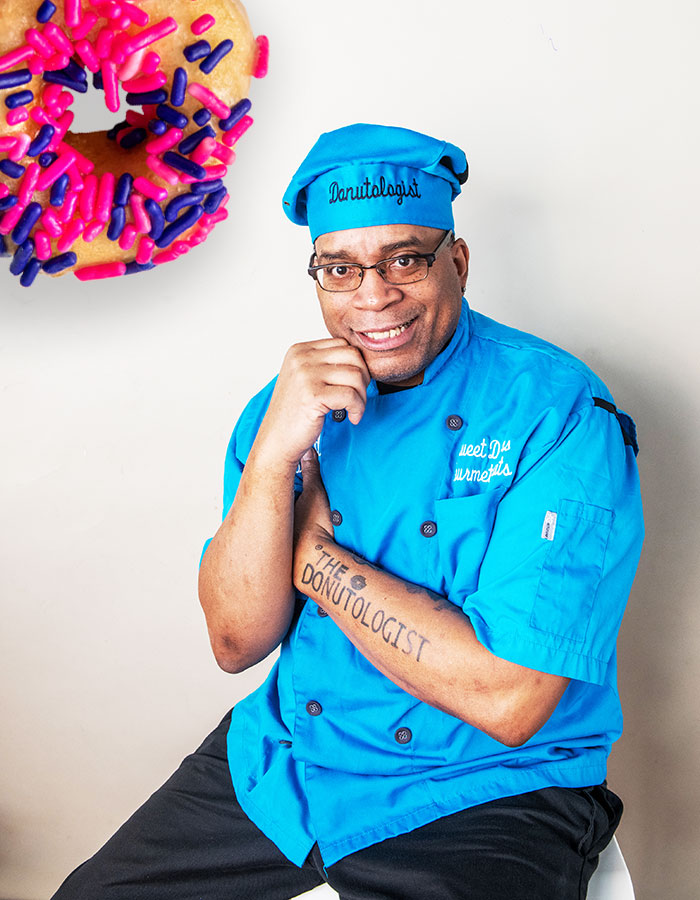 He has been contracted to do events for Steve Harvey, Michelle Obama’s Chief of Staff, Facebook, Google and Bloomingdales among others.

Eventually, corporate management implemented new production policies that were not to his liking and Jones decided it was time to start a new chapter in his life. He also decided that it was time to alter the size of donuts, The trend was turning to a strict low carb sensibility and simultaneously the public was being educated on the dangers of trans fat. His new motto was “Mini is the New Skinny”. Todd opened his first venue in the Colosseum Mall in Jamaica, Queens, where he sold only mini donuts and baked them behind a glass window for all to see. He named his company Cuzin’s Duzin.

As business was slowing down at the mall, the Donutologist received an offer he could not refuse. He was recruited for a prime spot in the Albee Square Mall in Brooklyn. He hit the jackpot at this location and expanded his business to include a catering division.

Sweet Dreams specializes in corporate events, parties, weddings and bar mitzvahs. He travels with his Sweet Dreams donut machine and bakes donuts live on the spot. He has been contracted to do events for Steve Harvey, Michelle Obama’s Chief of Staff, Facebook, Google and Bloomingdales among others. A sampling of his press coverage includes, The New York Times, O Magazine, The Wall Street Journal, Tony on New York and Black Enterprise.

“I love this place” states the Donutologist. The camaraderie of the vendors is magical. What you have here are the all stars of Brooklyn eateries. It is like family. At the DeKalb Food Hall there is a perfect mix of music, people, aromas and flavors.”

When Albee Square was taken over and Jones was on the verge of displacement he received a fortuitous phone call from Anna Castellani, owner of Forager’s as well as the curator of the Dekalb Food Market. Anna wanted Cuzin’s Duzin to be represented in this new Brooklyn artisanal food venue in City Point. It was a done deal. Todd celebrated this new opportunity by spreading the love.

“I love this place” states the Donutologist. The camaraderie of the vendors is magical. What you have here are the all stars of Brooklyn eateries. It is like family. At the DeKalb Food Hall there is a perfect mix of music, people, aromas and flavors. And on the weekend, you can add poetry to the mix. It is Brooklyn at its finest”

To keep up with demand, Jones acquired 4 donut machines. Each machine is capable of making 1200 donuts per hour. A regular sized plain donut is 255 calories, Todd’s mini donuts are 31 calories each and they do not contain any trans fat.

The Donutologist claims that he has glaze in his veins and his secret to success is DO NUT STOP. He also believes that money and experience are inconsequential and that it is the passion that brings happiness and success.

Cuzin’s Duzin will begin franchising on May 2nd which happens to be Todd’s birthday and unofficial national mini donut Day!