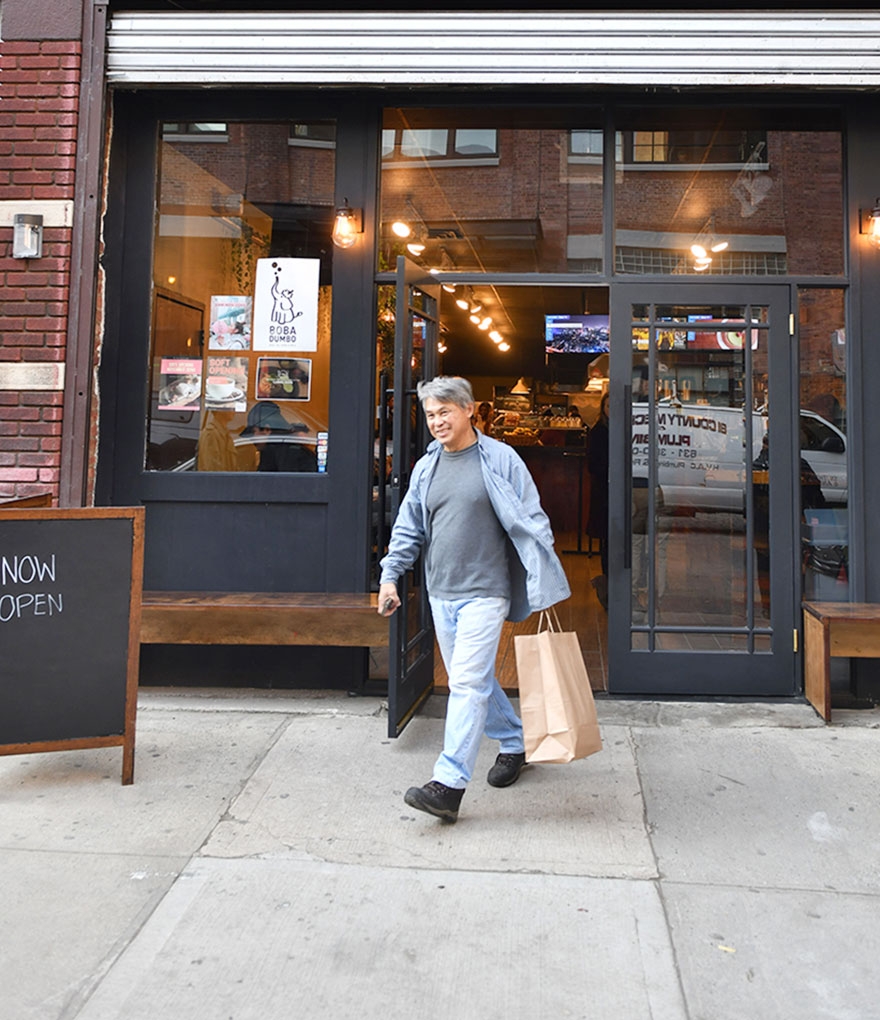 The year was 1999, landline telephones were ringing off the hooks and the artists, and artisans fled from their studios to witness the miracle with their own eyes. This was probably the most memorable day in Dumbo history on par with the first Open Studios. A long awaited dream had come true as the first deli opened up in Dumbo at 69 Jay Street. Its name was the Jay Street Mini Mart. Thankfully Bobby, who is also known as Jimmi and his partner Ahmed had the foresight to manifest what the neighborhood had desperately longed for and Dumbo was forever grateful.

During that era, If you wanted a decent cup of coffee, a tuna sandwich on rye, basic cooking staples or simple over the counter sundries or medications you had to make the trek up the hill to Brooklyn Heights.  There was no other way.

Bobby and Ahmed had a large warehouse space where they imported fish from Bangladesh and India. They carved out a small portion of their space to create the deli. There was no notice advertising its opening, it was a major surprise. Although nobody was familiar with Bobby (Jimmi) or Ahmed at the time, they quickly became great friends and supporters of the Dumbo artists community

The place was a tiny shoebox with a little bench outside where people from all over the world  would hang out and drink coffee. There was always a basket of slices of Italian bread that were complimentary. Many artists and entrepeneurs  whose careers have taken off since that time were Jay Street Mini Mart regulars.

When a local developer attempted to evict an entire building of creatives on Christmas Eve, the partners  came to their rescue, They turned their big freezer into a stage where bands could perform and raise money in order to help the evictees with their legal fees. The Art Festival was the main event of the year and Bobby invited artists to use the warehouse as a venue to exhibit installation pieces. The Dumbo band So So Human also performed there many times throughout the years.

If you were a young artist starting out and there were many in those days you could barter for sandwiches.  Photographer Mike Kamber supplied the deli with postcards with images of the bridge and waterfront for the thickest turkey sandwiches that you could imagine with lettuce, tomato and mayo of course. The iconic model Verushka, famous in the 1960’s and 70’s was a resident at that time. She fed the stray cats in the neighborhood and the partners supplied the Friskies.

During that era, If you wanted a decent cup of coffee, a tuna sandwich on rye, basic cooking staples or simple over the counter sundries or medications you had to make the trek up the hill to Brooklyn Heights.  There was no other way.

Federico Solmi who now shows around the globe also has Dumbo roots in the Mini Mart.  He needed a studio where he could live because he had to move out of his temporary Queens share. He was instructed to go to the Mini Mart get a coffee and relax for an hour on the bench and that one of Bobby’s customers would find him a studio. The poor guy was a wreck. He did what he was told and 30 minutes later he had a space in 68 Jay with a great view for $400 a month. Stained glass artist, Franca SanGiovanni would cook dinner several nights a week for 68 Jay residents on her simple hot plate in her illegal to live in loft. She never cooked the same pasta twice and bought her spaghetti and rotini at the shoebox deli.

Tom Fruin, of stained glass water tank fame was also a regular at the Mini Mart, as well as Jared Della Valle,  C.E.O. of Alloy development. Mark Jupiter’s furniture designer extraordinaire liked to order the tuna on pumpernickel with extra mayo. Jon Goldstein, known as the mayor of Dumbo also frequented the joint and  was one of Bobby and Ahmed’s most loyal customers. Tanya, Caralee and Laura, owners of Superfine also frequented the mini mart.

However, nothing lasts forever and when the landlord encountered some issues with building permits, the deli had to move. Josh Gutman, the landlord  found the partners a new and bigger space on the corner of Jay and Front in 68 Jay Street. The new name was Jimmi’s kitchen.

Jimmi’s Kitchen served  buffet style Indian food. A large serving of chicken marsala was about four bucks. The decor was very plain with white walls, a brick ceiling and cold concrete floors. It was a popular gathering place for the neighborhood with the ambience of a school cafeteria. The venue had the only public  TV in the community. I remember watching the OJ verdict being announced right in that very spot. When Bobby hired Dorzi, an immigrant from Nepal, Dorzi established the first salad bar in Dumbo and there were literally lines around the block every single weekday. This was Dorzi’s first job in America and he worked for Bobby for over 15 years.

When that lease ran out and the rent went sky high due to the beginnings of  gentrification, it was a sad day for the neighborhood. At that juncture Bobby and Ahmed split the company. Ahmed continued in the wholesale fish business and Bobby took over the retail establishment.

I assumed that another beloved Dumbo institution had gone the way of P.S. Bookshop. Thankfully I was wrong. Behind the gate Jimmi’s was transforming into its 4th incarnation and Bobby is confident that this one will be the best yet. 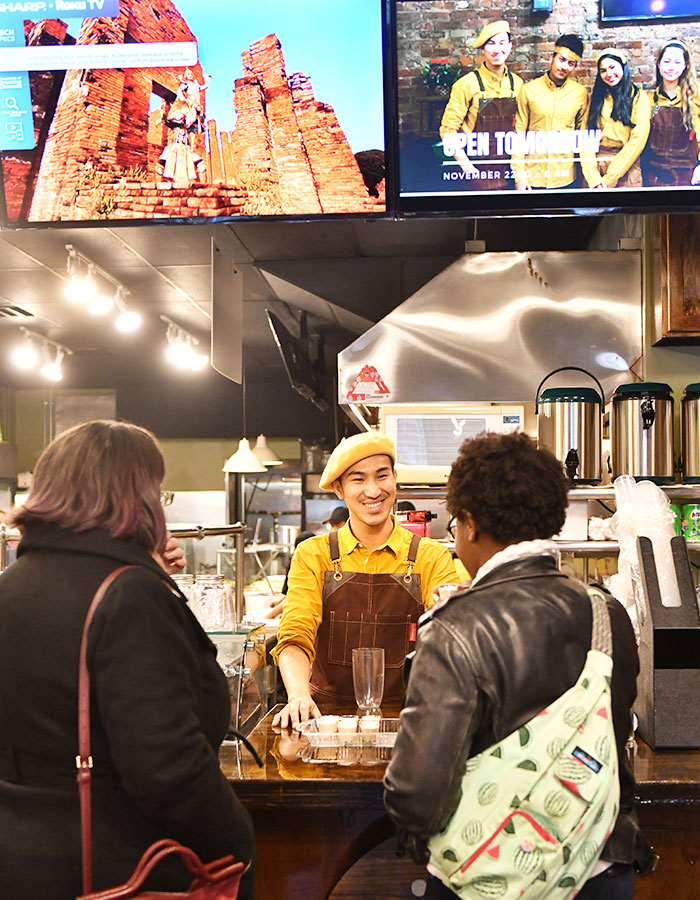 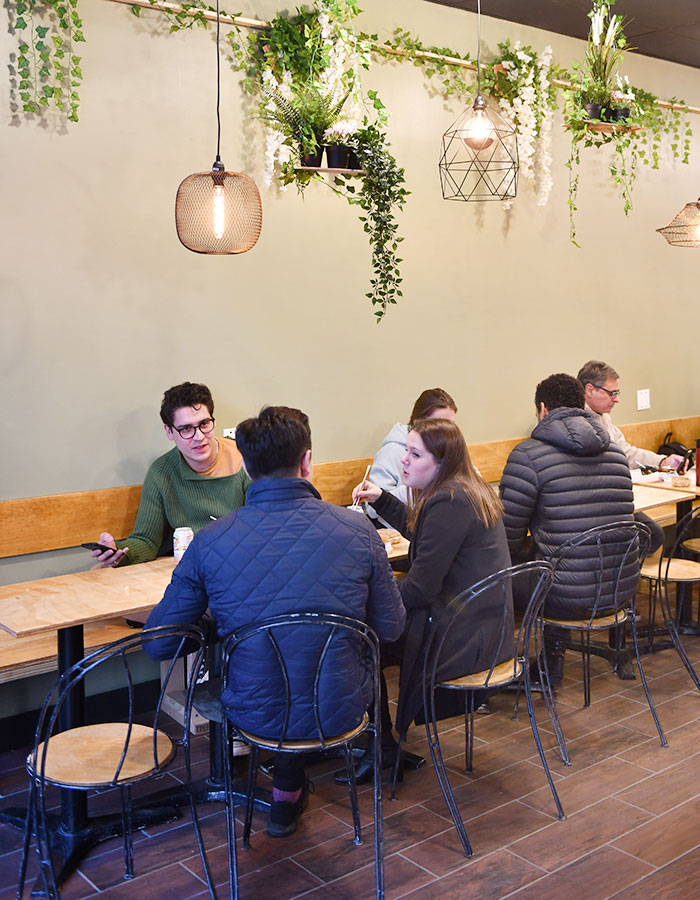 The next incarnation of Jimmi’s is the one that we all knew and loved for 15 years. A place where all of Dumbo could get a good hot meal without busting the budget. The colorful and fragrant  hot trays of Indian and Asian food came out of the kitchen around 11:00 with a steady flow of customers until closing at 3:00 p.m.. May, Bobby’s sister was a neighborhood staple as she possessed strict dominance over the cash register from the day they opened to the day they closed. Dorzi continued cooking there for many years as well as Mario who was a transplant from Pedro’s. Even after Mario’s mild stroke he came back to fry the eggs, and butter the toast always with a twinkle in his eye. Both men are neighborhood jewels.

A couple of months ago, I went by Jimmi’s and saw the gate pulled down with no sign of activity I got nervous. When I went back the next day and the gate had not moved, I was shocked and saddened.  I assumed that another beloved Dumbo institution had gone the way of P.S. Bookshop. Thankfully I was wrong. Behind the gate Jimmi’s was transforming into its 4th incarnation and Bobby is confident that this one will be the best yet.

Ready to retire, Bobby has partnered with 4 other people to make the new Jimmi’s a fusion of Asian cuisines. His partners Tip and Tommy will be in charge of the Thai food and bubble tea. Hung from Canton will be the Chinese chef. Bobby will still have an interest in the historic salad bar. Brent, a native Brooklynite as well as a  customer and close friend of Bobby’s for many years will take over as the day to day manager.

While Bobby is thrilled to pass the torch to the new generation, he was adamant in paying homage to some of his most loyal customers. Dumbo will always feel like home to me says Bobby but I will always remember the early days when I first opened. The artists were so friendly and generous, it was like one big wonderful family.

Thank you Bobby for all that you have given to Dumbo. You are an important part of our history.

Bobby wanted me to end this article with one word… Philotimo. He would not tell me what it means, I looked it up.

Philotimo is a Greek noun translating to “love of honor”. However, philotimo is almost impossible to translate sufficiently as it describes a complex array of virtues.

Opening: The soft opening took place on November 19th. The official opening will take place right after the new year. Please visit and support the new Jimmi’s so that it can serve the community for the years to come!