Front & York: the Monster on the Corner

The 85 Jay St. mega project  known as Front & York is now a reality in our community of Dumbo. The 135,000 sq. footprint former parking lot previously owned by the Jehovah’s Witnesses has already impacted our neighborhood in the areas of dust, labor issues, parking, traffic, and safety for cyclists. An Impending transportation issue of serious concern also looms upon the horizon as a large percentage of residents from the over 770 condos/apartments will most likely be joining existing Dumbo strap hangers on the York Street F train platform. This station is already experiencing major overcrowding and safety problems resulting from exploding demographics and the unfortunate reality of a subway station with only one exit.

Back in 2004, the Jehovah’s Witnesses also known as the Watchtower became interested in developing the steel gated, private parking lot. At that time, the land was zoned exclusively for manufacturing.  Incompatible with the Watchtower’s plans for a mixed use residential and community facilities project, the Watchtower applied to the Department of City Planning for an upzoning review. As a result of their religious status, the department granted them generous zoning modifications. They were granted a dispensation which allowed them to build higher density residential units on the site as well as community facilities which included medical and administrative offices.

As a self contained community that rarely patronizes community businesses and pays little in  taxes it is questionable as to why they were granted such generous zoning upgrades. In 2004 Dumbo’s identity was that of an industrial/artist’s enclave. Upon approval of the upzoning, the Watchtower pledged to renovate Bridge Park II located on Jay Street. As an additional concession they also pledged to upgrade the York Street F train station as stated by former Councilman David Yassky. It was a handshake deal.

An Impending transportation issue of serious concern also looms upon the horizon as a large percentage of residents from the over 770 condos/apartments will most likely be joining existing Dumbo strap hangers on the York Street F train platform.

When the Watchtower’s plan of 4 identical towers was presented to the community board, the board’s main concern was  the height of the towers. The towers were proposed at 22 floors each. In order to compromise with the community the plans were revised to build higher towers on the Jay Street side and lower towers on the Bridge Street side. This compatibility factor was based on the fact that  the 100 Jay condo building with 33 stories had already existed and therefore the higher towers would be a better fit on that side of the neighborhood.

At that point the issue of the park renovation was revisited. A condition of the sale was contingent on the Watchtower making good on its pledge to renovate the park. Unfortunately they had to be prodded and persuaded to make good on a promise to a neighborhood where they had resided for decades. The renovation should start in Spring 2020. The pledge to upgrade the subway station was apparently neither  addressed or transferred to the new developers. 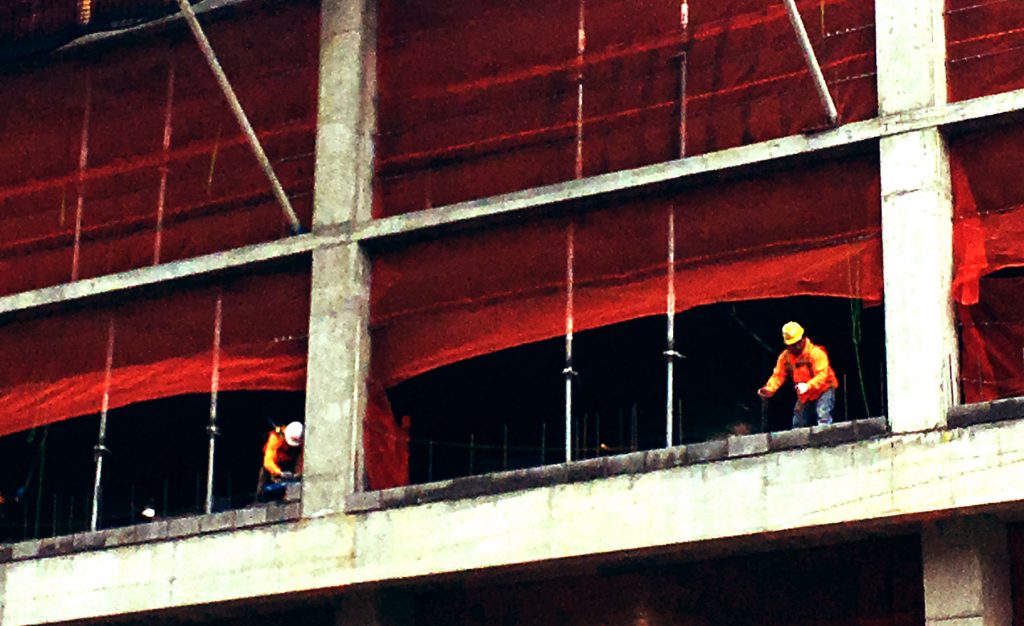 It seems quite detrimental to our neighborhoods that plans approved in 2004 can be legally sold 10 years later with the right to build without a review of the initial project by the Department of City Planning. Dumbo, a flourishing and expanding neighborhood  has changed dramatically over the last 10 years and this new mega project with over 770 apartments will unquestionably put a major stress on the transportation infrastructure which is already pushed over its limits and poses a safety hazard to both residents and commuters Thanks to the Dumbo BID and Delson or Sherman Architects there are two neighborhood petitions circling throughout Dumbo appealing to the MTA to recognize the safety issues and to request inclusion in their 2020 plan to renovate the subway system. The local architecture firm Delson or Sherman has also proposed plans for a second entrance which is desperately needed. With only one entrance and an increase in strap hanger ridership the station is a potential death trap. It is terrifying to think what could happen in an emergency.

In 2004 transportation concerns were a non issue. The resident Jehovah Witnesses would not have been commuting to work. They would have been employed by the Watchtower itself and remained within the community during working hours. Traffic concerns would have also been alleviated since their cars would only be in use in the evening when they traveled to events and prayer services outside of Dumbo.The project allowed for ample parking spaces within the development.

I would suggest that any potential buyer at 85 Jay check out the York Street subway situation before making such an expensive purchase. While they will be enjoying the luxury amenities of elegant swimming pools, wine rooms, the Lifetime Wellness Club, and Gaggenau appliances, their F train commute will undoubtedly cause them stress and discomfort. If you have a stroller, you might want to  prepare to walk to the Borough Hall station where there is an elevator, unless moms, dads or babysitters enjoy shlepping up and down 72 stairs and climbing/descending a steep ramp. As an alternative there is always the A train or a 12 block walk to the 2 or 3. I suppose one can always call a Lyft or Uber. If old school you can still dial Eastern Car Service at 718-499-6263 and if you are lucky, they will dispatch Segundo or Luis. It’s a great way to practice your Spanish.

When asked to comment about the York Street station and if they had any plans financially or otherwise to help alleviate the overcrowding and safety concerns a representative of Front and York responded as follows:

“We also want what is best for the neighborhood. We are in dialogue with the DUMBO BID, as well as other local stakeholders and elected officials, and remain interested in engaging with the community to discuss ways to push the City/MTA to make upgrades to their infrastructure.” – Front & York Spokesperson