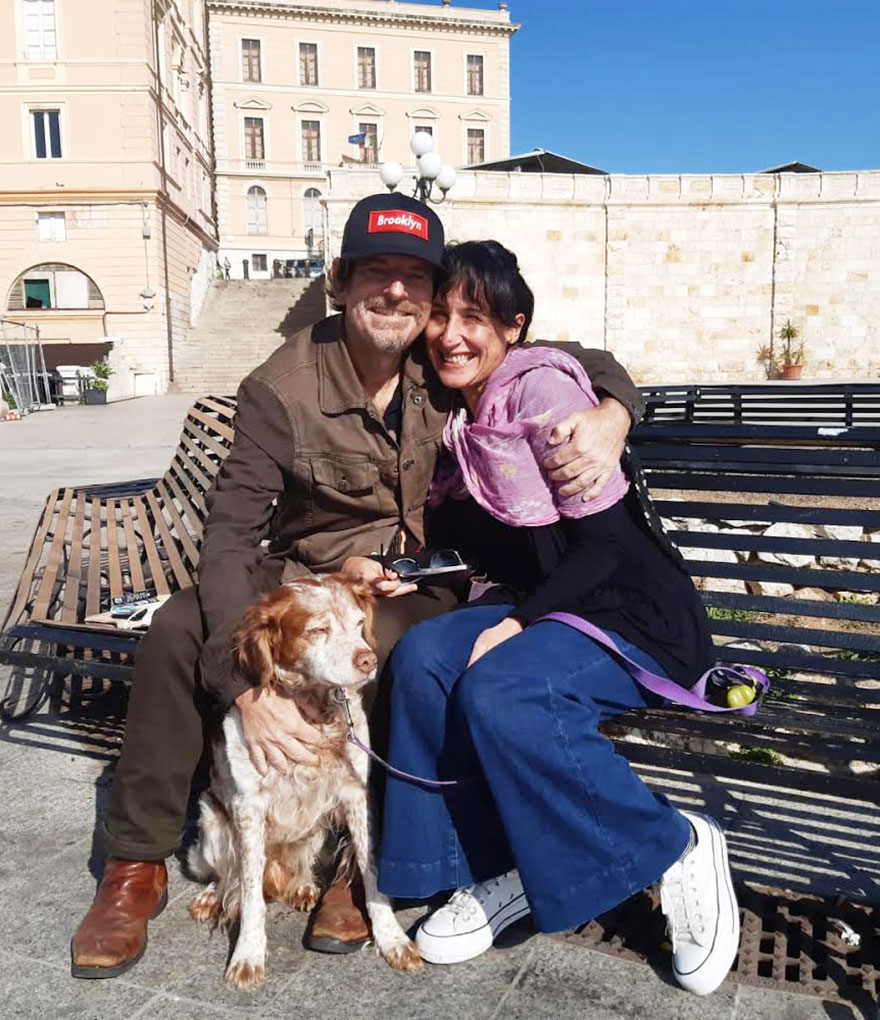 Multimedia artist John Ensor Parker, primarily known in Dumbo for his video projections on the Manhattan Bridge has found his one true love, Enrica. The couple met one fateful night in 2018 at the 68 Jay Street Bar, where John is a regular patron. Soon, he will be moving to Enrica’s hometown of Cagliari, Sardinia, where the two will get married. Fortunately, John is a dual U.S / Italian citizen as his mother is Italian from Rome.

As bittersweet as it will be to see him go, the twists and turns that have led up to this fateful encounter, as well as the trials and tribulations they have endured, renders this love story worthy of public celebration and a place in Dumbo valentine history.

While John’s primary medium is light, his life took a dark turn when he was diagnosed with Stage IV Follicular Lymphoma in 2017 followed immediately by a failed marriage! “ It was a triple whammy, I had to deal with cancer, chemotherapy, and divorce simultaneously,” says the artist. I was emotionally and physically devastated and needed every ounce of energy just to stay alive. Thank God my Dumbo friends and family were here to support me in my struggle as I went through my first stem cell transplant. Fortunately the procedure was successful and I was eventually able to resume back to a normal life.“ 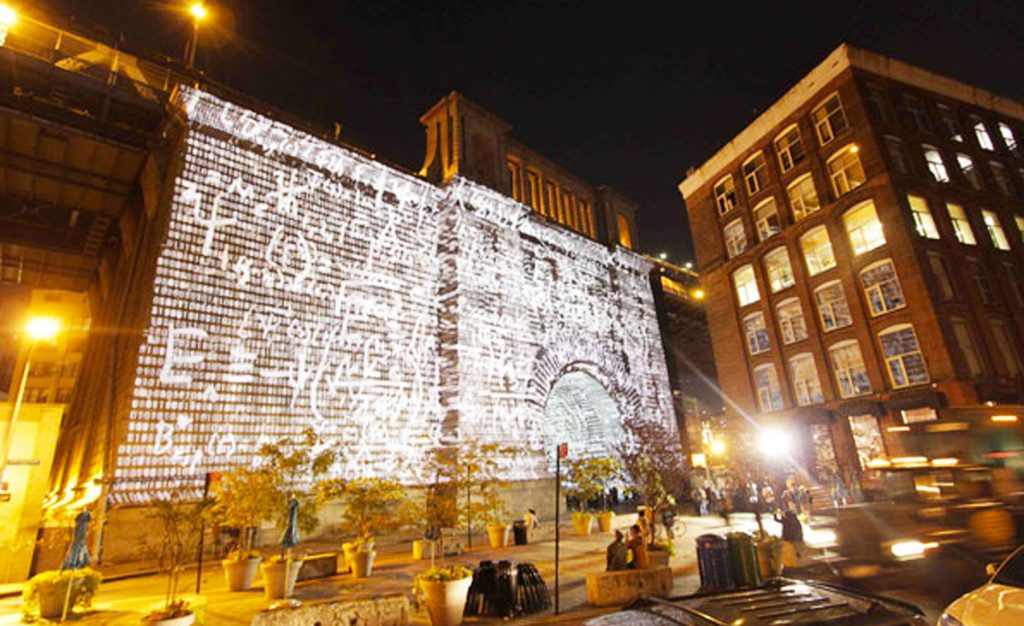 “It was a triple whammy, I had to deal with cancer, chemotherapy, and divorce simultaneously,” says the artist. I was emotionally and physically devastated and needed every ounce of energy just to stay alive.

In the meantime, a few neighborhoods away in Bedford Stuyvesant, an Italian woman named Enrica Massidda was spending time in New York and renting a room. She had just completed a language program and was now getting to know the city. Among other artistic endeavors, Enrica is a graphic designer and illustrator and has a small independent publishing house. Her passions for art, literature, cinema and culture drew her to spend time alone exploring every corner of the city she had come to adore.

One particular evening she decided to look for the bench where Woody Allen and Diane Keaton waited for the sun to rise in the movie Manhattan. She came to Dumbo and walked along the East River but her search proved unsuccessful. Eventually she realized that she had been in the wrong borough as the iconic scene was actually filmed under the Queensborough Bridge, not the Brooklyn Bridge. However, in this situation, ignorance turned out to be bliss.

On her way home, Enrica stopped into a local artist meeting watering hole, 68 Jay Street Bar where John was a regular patron. Smitten by her beauty and overall vibe, John overcame his shyness with women and summoned up the courage to approach his soon to be beloved. He said to his friend Shiv, “If I leave here tonight without talking to this woman, I might regret it for the rest of my life.” 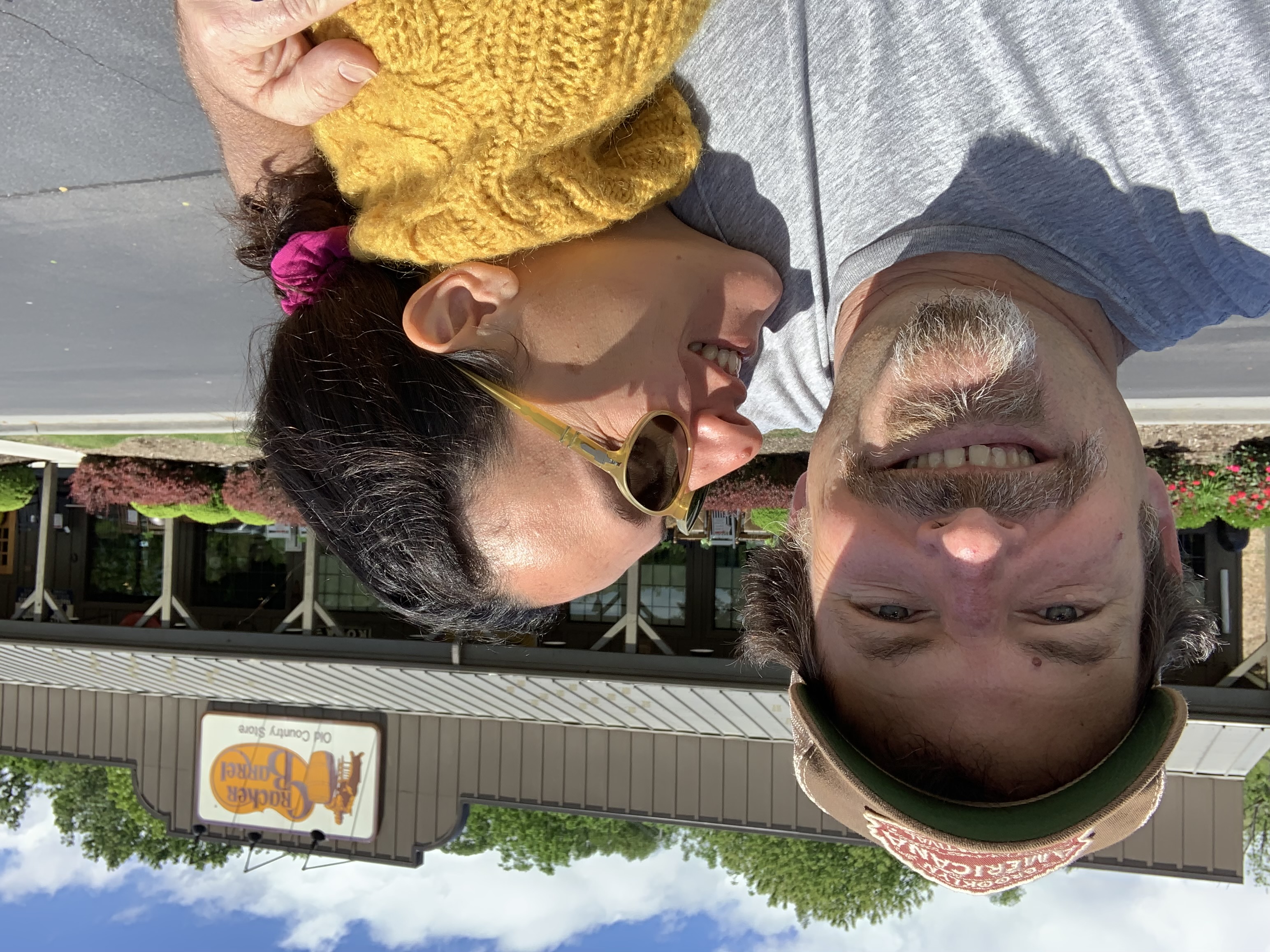 “It was fast love that hit me very hard and very deep” confessed the Dumbo artist.

“It was fast love that hit me very hard and very deep” confessed the Dumbo artist. That evening, they spent some time at the pub followed by a stroll along the river at the Brooklyn Bridge Park. Immediately they started dating and the romance quickly blossomed. “My memory of our dinner date at Noodle Pudding in Brooklyn Heights was an evening of pure romantic magic” states the artist.

From the time Enrica went back home in December, the two lovebirds spoke and wrote multiple times every day. Finally, in February, the couple was reunited when John went to Caligari and they stayed by each other’s side through March. “It was like we had always been together” states Enrica. In April, she returned to New York, but unfortunately, John’s cancer had returned, Despite that dark cloud hanging over their head, they took a trip to meet John’s family in Florida and after rented a house in the Hudson Valley. Enrica accompanied John for his cancer treatments in Manhattan and simultaneously assisted him in producing the New York Festival of Light light in Dumbo. The festival, a smashing success, was so well attended that the MTA had to shut down the York Street F train station as a result of dangerous overcrowding. Any seasoned New Yorker would recognize this as a great claim to fame as well as a spectacular and unique way to impress a new love.

Shortly after returning to Italy, Enrica tried to return to New York, but the Immigration Police were suspicious of her wanting to enter the country so quickly after her previous visit. Unwilling to give up, she tried a few months later and was successful. By sheer luck. The immigration agent interviewing her had spent time on a military base in Sardinia and began fondly engaging her in conversation. He then stamped her passport without a glance and admitted her. “Once I emerged from customs, I felt as though I had wings, “ says Enrica. I flew to the hospital with sonic speed and was able to stay by John’s side for two weeks.”

Then came the second stem cell transplant, medical complications, as well as Covid and the couple were not able to be together for over a year. In September, John, like the proper gentleman that he is, got down on one knee during a zoom call and proposed to the woman who had stuck by him through every major obstacle with an abundance of love and devotion. In March John will move to Sardinia where the two will seal their love by getting married and build their life together.

It has been nearly one year since John’s second transplant and he is still in remission. If he remains clean for another year he will have reached the two year mark. At such time the statistical probability of the cancer returning drops significantly and he will be deemed cancer-free.

“I must have done something very special in my previous life” states John. “I do not know what I did to deserve Enrica”. As she notes, “ The connection between me and John is something ancestral, I followed my instinct, which was to love him and believe in us despite everything. John is a visionary and so am I and we love each other! It couldn’t be differently”.

John and his two partners Leo Kuelbs and Farkas Fulup (Glowing Bulbs) will continue their work projecting videos on the wall of the Manhattan Bridge every first Thursday of the month as they have done for nearly six years. They also have plans to expand this concept to other major cities throughout the globe including Berlin, Budapest and of course Cagliari, Sardenia.